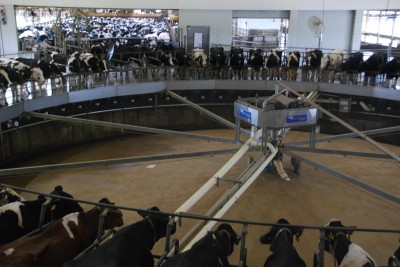 A flurry of recent news shows that international development banks have ramped up public money to factory farms and mega-dairies in the last decade. The World Bank alone spent US$1.8 billion on these operations, with over half of the funds going to Big Dairy, contributing to both rising emissions and increasing corporate concentration. IATP’s Milking the Planet report shows that 13 of the largest dairy producers increased their greenhouse gas emission by 11% in just two years, their combined emissions greater than U.K.’s annual emissions. They did this as rural dairy producers went out of business due to debt and disenfranchisement. These publicly funded institutions, such as the European Bank for Reconstruction and Development (EBRD) and the World Bank’s private arm, the International Finance Corporation (IFC), with missions to reduce poverty and help countries develop, have instead spent billions funneling money into some of the most powerful dairy and meat corporations in the world.

The EBRD took a stake in Danone’s subsidiaries in eastern Europe and central Asia. These “investments” made 10 years ago were intended to expand Danone’s business in Russia, Ukraine, Belarus and Kazakhstan. Danone’s sales generated 25.9 billion euros last year. Global pork giant Smithfield Foods, Inc. (subsidiary of WH Group) received $60 million for its subsidiary in Romania. In 2009, The New York Times reported: “In Romania, the number of hog farmers has declined 90 percent — to 52,100 in 2007 from 477,030 in 2003 — according to European Union statistics, with ex-farmers, overwhelmed by Smithfield’s lower prices, often emigrating or shifting to construction.” Poor use of development money combined with EU farm policy has led to the loss of thousands of small farms in Romania. And yet, this is not the first time Smithfield Inc. has gained from taxpayers. The company received millions of U.S. taxpayer money in 2018 through the Trump administration’s bailout during its trade war with China.

IATP joined 30 organizations this month in an open letter to the heads of the IFC and EBRD stating:

“In a time of climate crisis, public finance institutions such as the Multilateral Development Banks (MDBs) have an urgent responsibility to align their lending with the goals of the Paris Agreement. As calls come from economists and environmentalists alike to ‘build back better’ following the pandemic, it is essential that we include agriculture in considerations of how we finance a sustainable future.”

The European Investment Bank is the lending arm of the European Union and self-described as the “largest multilateral financial institution in the world and one of the largest providers of climate finance.” It has pledged to raise its share of finance for climate and environmental sustainability to 50% of its overall funding by 2025 in support of the European Green Deal. As part of this Climate Bank Roadmap for 2021-2025, it sought input from various entities. In its position paper on the roadmap, the EIB states that it is considering investment support to the meat and dairy industry that is “based on sustainable animal rearing contributing to improved GHG efficiency.” IATP and the Global Forest Coalition provided our input last week on its lending to the meat and dairy industry, stating:

“Improved GHG efficiency” is simply an inadequate indicator for mitigation and adaptation of the sector. The EIB must integrate both concepts (mitigation and adaptation) into its agricultural investment portfolio. The EIB is right to include socio-economic, environmental and animal welfare impacts in its definition of sustainability, however a narrow metric of resource efficiency should be altered to integrate ecosystem restoration as a definition of sustainability which includes GHGs but also vital additional metrics for transformative change.

Such metrics include 1) measures for ecosystem restoration 2) biodiversity generation 3) soil health 4) water retention and 5) trajectory of absolute emissions. The EIB’s approach to both the meat and dairy sector and the bioeconomy overall should be reframed to prioritize ecosystem restoration following ecosystem-based approaches (EBA) with significant mitigative and adaptive potential.

The EIB asks in the consultation paper, “how can the EIB best support the meat and dairy industry to be consistent with a low-carbon pathway?” to which we responded:

The EIB should define what it means by the “meat and dairy industry” it intends to support. Numerous livestock producers in the Global South and North are dramatically impacted by different aspects of the industry — for instance, market concentration in various parts of the supply chain, including processing and production. The range of intensive/extensive animal production systems are incentivized or thwarted by the inordinate level of market power that different parts of the industry wields on the supply chain. This market power combined with significant political power prevents transformative change in the livestock sector. The EIB’s investment strategy that incentivizes transformation of agricultural practices towards the metrics suggested above can help send a clear market and political signal towards such transformation. It can also help EIB focus in on the parts of the supply chain, including producers and workers and not simply its middlemen, that need support to transform the sector. EIB should refrain from investments that facilitate perverse incentives to expand livestock production and which lead directly or indirectly to deforestation and land degradation.

We suggested that the EIB take a two-pronged approach to their investment strategy on livestock. They must take away investments from the meat and dairy industry where further intensification leads to rising absolute emissions and perverse incentives for expansion of livestock production, declining biodiversity and negative impacts on the metrics identified above. Second, the EIB should support agricultural practices, food hubs, decentralized food markets that support rights-based approaches and restore ecosystems. The goal should be climate resilience and mitigation that helps empower local communities, indigenous peoples and workers while diminishing market power of oligopolies in agribusiness that drives social and environmental standards towards a race to the bottom.

The EIB will publish the results of its consultations in the last quarter of this year with the aim to have the new lending roadmap in place by next year. The EIB’s lending will play a critical role in public money going to either transformative change of the livestock sector or compounding the problems we face with public handouts to Big Meat and Dairy. Choosing transformative change could also send the right signals to EU institutions tasked with the roll out of the EU’s Farm to Fork Strategy under the European Green Deal and reforming its Common Agriculture Policy (CAP). The CAP funnels 18-22% percent of the EU budget towards livestock, largely benefitting Big Meat and Dairy. Public sops for this powerful global industry, whether international or national, must stop if we want real food system transformation for the planet.