41 years on from the revolutionary triumph of 1979, the Sandinista Front for National Liberation (FSLN) in Nicaragua looks stronger and with greater legitimacy than ever. Nicaragua embodies the same revolutionary paradox as Cuba and Venezuela. Despite all three countries being attacked via illegal unilateral coercive measures imposed by the US government, followed by its European allies, all three revolutionary governments have defended their peoples against the current pandemic with much greater success than neighboring countries. 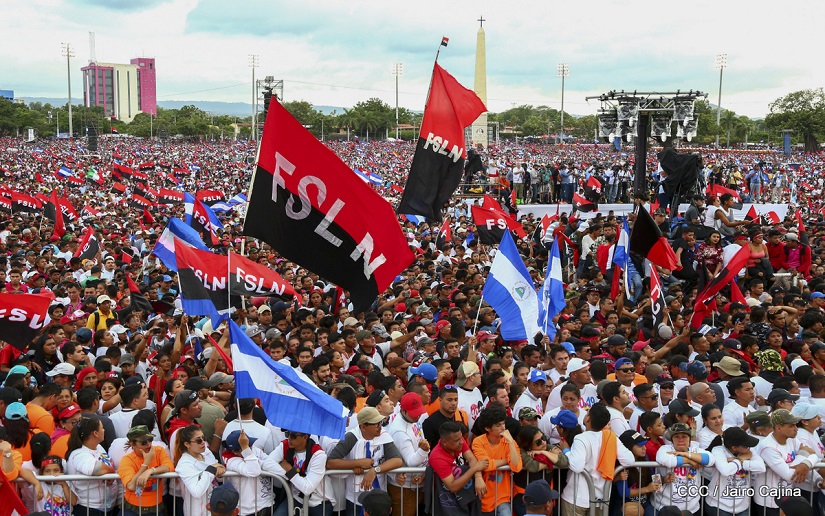 The fundamental reason for that paradox is that all three revolutionary governments are implementing national human development projects focused on the needs and well being of the human person. With practically no exceptions, all other countries in the region are subjugated to the neocolonial US imperialist vision. They all prioritize corporate profit inspired by the demented neoliberal myth of “free markets” making impossible any sovereign project of national human development. The counter-revolutionary debacle in Bolivia offers explicit confirmation of that reality.

In Nicaragua, the victories of the Sandinista Front for National Liberation over the last thirteen years derive directly from Sandinismo’s historic program of 1969. Proclaimed under the leadership of Carlos Fonseca Amador, that program itself expressed the patriotic but also Bolivarian vision of General Augusto C. Sandino. Above all else, the extraordinary contemporary achievements of the FSLN led by Daniel Ortega and Rosario Murillo  embody a triumph of loyalty, unity and commitment to that national program of sovereign development, over a century in the making.

During all that time, the US ruling elite and their governments have vainly tried to stop that sovereign revolutionary project. In 1934, on their orders, Anastasio Somoza murdered General Sandino and his comrades. With support from the US ruling elite, the Somoza dictatorship ran Nicaragua as a vast private hacienda for over 40 years. After the FSLN led the tyrant’s overthrow in 1979, the US elite imposed a vicious terrorist war, continuing even after it was condemned in 1986 by the International Court of Justice.

After losing the epoch-making national elections of 1990, the FSLN divided and most people thought the movement was finished. But then, most people fail to understand how for the FSLN, “Patria Libre o Morir” (“Free Homeland or Death”) is not just a slogan but a fundamental mission its militants live out and serve with every breath they take. When Comandante Tomas Borge Martínez wrote about “The Patient Impatience”  he was writing about an implacable resolve and a serene revolutionary love inevitably destined to defeat the savage sadism and cynical hypocrisy of the US elites and their allies.

After returning to office in January 2007, Daniel Ortega and FSLN legislators were re-elected in successive democratic elections in 2011 and 2016, with increased support each time, on the basis of their implementation of the FSLN’s historic program remade as a National Human Development Program. In response, the US government invested millions of dollars to organize and stage a violent coup attempt in April 2018. An investigation by Managua’s Radio La Primerísima’s William Grigsby revealed that just in 2017-2018, USAID alone invested over US$15 million in the opposition aligned organizations that carried out or directly supported the failed coup attempt.

They paid over US$3.2 million to Nicaragua’s three most well known anti-government human rights organizations and another US$3 million to Carlos Fernando Chamorro’s CINCO anti-government media NGO conglomerate. They paid another US$9 million to other organizations that also supported the violent coup attempt, including the Anti-Canal Movement and NGOs run by Monica Baltodano, Felix Maradiaga and Juan Sebastian Chamorro. William Grigsby’s report demolishes the standard Western media portrayal of the failed 2018 coup attempt as a spontaneous uprising led by independent civil society organizations.

The increasingly severe illegal unilateral coercive measures against Nicaragua correspond to the increasing frustration of the US government and its allies. They have failed and will continue failing to undermine popular support for Daniel Ortega’s government let alone achieve their ultimate objective of destroying the FSLN . In part their failure is based on the tremendous social and economic achievements of the government team led by Daniel Ortega and Rosario Murillo.

Poverty fell from 48.3% in 2007 to 24.9% in 2016. In the same period extreme poverty fell from 17.2% to 6.9%. Health care in Nicaragua is free. In May 2020 the country had more hospital beds at 18.5 per 10000 people than Colombia or Mexico and more intensive care beds at 8.6 per 100,000 people than Japan or the United Kingdom. The country has built 19 hospitals since 2007 with 7 under construction and another 7 scheduled to be built over the next few years. The country will inaugurate its second lineal accelerator for cancer treatment later this year. Maternal mortality has dropped to 34 deaths per 100,000 births thanks in large part to the country’s unique prize-winning Maternal Shelter program for rural women.

Electricity coverage reaches 97% of the population. 90% of the population has access to drinking water. Nicaragua’s highway system is ranked among the top five in Latin America. Nicaragua remains the safest country in Central America and among the safest in all the Americas. Nicaragua is among the top five countries in the world in terms of women’s political representation and among the top ten countries in the world closest to acheiving gender equality. Every year a government program extends property titles to tens of thousands of households, the majority made out to women. Indigenous and afro-descendant peoples have land title to almost a third of Nicaragua’s national territory.

Beyond the social and economic indicators, two fundamental processes underlie Nicaragua’s successful revolutionary transformation. One is the democratization of the country’s economy, prioritizing the popular economy and small farmers. This has enabled many thousands of new protagonists, the majority of them women, to participate actively in the country’s economic life for the first time. It has also promoted and  defended thousands of cooperatives, enhancing their access to technical advice, credit and marketing expertise. The same is true generally of small farm production and artisan production of all kinds in rural areas where 40% of Nicaragua’s people live. Accompanying that democratization, the other fundamental revolutionary process in Nicaragua has been the steady integration of the country’s Caribbean Coast.

In 2012 the International Court of Justice restored to Nicaragua over 90,000 km2 of maritime territory previously usurped for over 70 years by Colombia, making a physical, political and economic reality of what has always been the social and cultural reality, namely, that Nicaragua is a Caribbean country. Following up that crucial international legal watershed, the government’s highway program has connected the Pacific Coast with the port of Bluefields, the main southern Caribbean Coastal urban centre and will also connect soon via a new all-weather road to the port of Bilwi, the main urban centre in the country’s northern Caribbean Coast. The government has invested tens of millions of dollars in highways, drinking water and mains sewage, health and education infrastructure as well as electricity and optic fibre connections fulfilling the FSLN’s historic commitment to vindicate the rights of Nicaragua’s Caribbean population.

All of this is a large part of why the US, its allies and the mercenary opportunists in Nicaragua’s oligarchy will not be able to achieve regime change in Nicaragua. But the most important reason is that almost half Nicaragua’s population are Sandinista. They will never submit to any foreign intervention or control by the the United States and its allies. Today’s 41st anniversary reaffirms and vindicates the sacrifice of so many heroes and martyrs that made possible Nicaragua’s Sandinista People’s Revolution in 1979, its survival of the US terrorist war of the 1980s and its peaceful return to government in 2007. As Daniel Ortega put it  at last year’s commemoration of the national hero Benjamín Zeledón:

“…history keeps repeating itself. The difference now, is that after July 19th 1979, passing through the 17 years in which the Sandinistas were out of government, on July 19th 1979, here, in the heart of the majority of Nicaraguans, in the majority of rural families and urban workers, of youth, of professional people, a new Consciousness has taken root. At long last, Nicaragua after 1979 has a people fully aware and full of love for their country.”

From Diriangén to Zeledón and Sandino, to Carlos Fonseca and Daniel Ortega, the patterns of history do prevail and that is why, in Nicaragua, nothing will stop the Sandinista People’s Revolution.

This article was originally published on Tortilla con Sal.

Featured image is from TCS