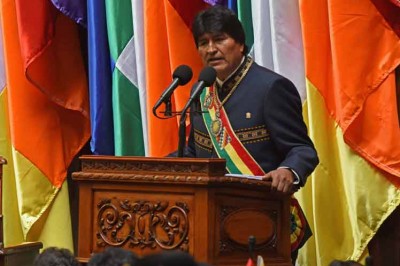 On July 15, Luis Fernando Camacho, leader of the violent coup against Bolivian president Evo Morales and current candidate for the Bolivian presidency, issued a desperate appeal to the Organization of American States.

Camacho says that “we mustn’t allow the elections to become an act of resurrection” for the MAS. pic.twitter.com/wYa9FvV4ST

According to a poll done by Centro Estratégico Latinoamericano de Geopolítica, which was released on July 7, Camacho is polling at nine per cent. Meanwhile MAS (Movement for Socialism) candidate Luis Arce, Bolivia’s finance minister from 2006 until the coup, is polling at 42 per cent. To surpass Arce’s lead in the polls, Carlos Mesa, the unelected coup president Jeanine Anez, and Camacho would have to consolidate their votes, while two would need to drop out of the race.

MAS candidate Luis Arce is poised for a first-round win in Bolivia’s presidential election, polling 15+ points ahead of the nearest rival.

In the appeal, Camacho, who has direct connections to the paramilitary group Unión Juvenil Cruceñista, argued that “we [Bolivia] must not allow the elections to become an act of resurrection” for MAS. This is an open call for the OAS to launch a second coup if Arce wins the presidential election, and violate the sovereignty of Bolivia yet again.

In response to this news, Evo Morales spoke out on Twitter:

Asking the OAS to rule on the suspension of the elections in Bolivia is a new blow against democracy, it is a form of intervention against the sovereignty of the State and the dignity of the people; and furthermore it is being asked by those responsible for the tragic events of 2019

The Bolivian people are not giving up on democracy without a fight. Today, the main Bolivian workers federation, Central Obrera Boliviana (COB) demanded “adhesion to the September 6th election date as adopted by the TSE [Election authority].”

The Central Obrera Boliviana (COB), Bolivia’s main workers federation, demands adhesion to the September 6th election date as adopted by the TSE. The regime is pursuing criminal charges against the COB’s leadership for the nationwide protests held on Tuesday. pic.twitter.com/BT8FhFUqKK

How Canada, the US, and OAS allied to overthrow Morales

On Nov. 29, 2017,  the Morales government won a legal challenge to modify the Bolivian constitution, which would have allowed Morales to run for a fourth term as the Bolivian president.

Two years later, on Oct. 25, 2019, the winner of Bolivia’s presidential election was announced. Evo Morales won 47 per cent of the vote, while the main US-backed candidate, Carlos Mesa, won 36 per cent of the vote. Morales narrowly cleared the 10-point margin of victory required to avoid a second-round runoff election, and it seemed as if Morales was set to serve his fourth term in office.

However, the OAS would have a key role in ensuring this did not happen. The OAS, described as the “U.S Ministry of the Colonies” by former Cuban president Fidel Castro, is supposed to “represent the 35 countries in the Western Hemisphere in defence of peace, equality and national sovereignty.” However, the organization has a long history of openly backing the United States’ imperialist agenda.

In particular, during the US-led 2019 coup attempt against Venezuelan president Nicholas Maduro, false claims of election fraud were utilised to try to push the “US puppet” Juan Guaido into power. The (leader), Luis Almagro praised the protests repeatedly, and allowed Canada to set up the Lima Group, an alliance of countries wishing to overthrow the Venezuelan government, without any punishment.

The OAS electoral mission to Bolivia soon claimed that they had found evidence of election fraud in Morales’ victory. Based on the claims of the electoral mission, Canada called for a run-off election to occur. On Oct. 31, the OAS began an audit of the Bolivian election.

The Canadian and United States government ignored a Nov. 8 report from the Centre for Economic and Policy Research, a US-based think tank, who did a statistical analysis of Bolivia’s publicly available voting data which found no evidence of irregularities or fraud.

On Nov. 10, the Bolivian election audit report was released by the OAS, in which they claimed that:

“In the four factors reviewed (technology, chain of custody, integrity of the tally sheets, and statistical projections), irregularities were detected, ranging from very serious to indicative of something wrong.”

The audit team “[could not] validate the results of this election and therefore recommends another electoral process.” They argued that “Any future process should be overseen by new electoral authorities to ensure the conduct of credible elections.”

On the very day, Canada, declared its support for the electoral audit, stating that “It is clear that the will of the Bolivian people and the democratic process were not respected.” A day later, Morales resigned the presidency after pressure was mounted by military chief, Gen. Williams Kaliman, calling for him to immediately quit and permit the “restoration of peace and stability.”

In a press release, Morales said:

I decided to resign from my position so that Carlos Mesa and Luis Camacho stop abusing and harming thousands of brothers … I have the obligation to seek peace and it hurts a lot that we face Bolivians, for this reason, so I will send my letter of resignation to the Plurinational Assembly of Bolivia.

On Nov. 12, a Bolivian senator, Jeanine Áñez, declared herself the interim president of Bolivia in Congress, vowing to promptly hold new elections. Aljazeera reported that “this was done despite a lack of a quorum to appoint her in a legislative session that was boycotted by legislators from former President Evo Morales‘ left-wing party.”

U.S. Secretary of State Mike Pompeo applauded the interim president in a statement on Nov. 13, saying that the U.S. looks forward to working with the OAS to stage “free and fair elections” by the end of 2019.

Two days later, Canada announced its support for Áñez, and laughably called for a “democratic elections as soon as possible”.

Bolivia in shambles without Morales, as elections are delayed until September 2020

In January 2020, a now-deleted racist tweet from “interim president” Áñez was caught, in which she reportedly wrote: “I want a Bolivia free of satanic indigenous rituals. The city is not for the indigenous. They should go to the mountains or plains.” Áñez also called Morales a “poor Indian” in another tweet.

A first-of-its kind deal was struck that month between Bolivia’s state mining company Comibol and Vancouver-based explorer New Pacific Metals, which allowed the company to begin mining for lithium and showed that “Bolivia is open to foreign investment,” according to NPM’s President, Gordon Neal.

Nadia Cruz, Bolivia’s ombudsman, said that charges of “sedition” and “terrorism” are being brought for simply disagreeing with or questioning the Áñez administration.

Michael Shifter, the president of the Washington-based Inter-American Dialogue said,

“There is unwillingness on the level of the Trump administration to hold Áñez to account, so she has a lot of room to do what she wants, including what seems to be the carrying out of vendettas.”

The promise of quick elections proved to be a lie, two months after the coup, that the Bolivian Supreme Electoral Tribunal, which was filled with Anez allies, and purged of former officials, determined the presidential election would occur on May 3. However, the Bolivian electoral court used the COVID-19 pandemic as cover to delay the elections until September 6. Now that Luis Camacho is urging the OAS to interfere in Bolivia’s elections yet again, the stage may be set for a second coup against a Movement for Socialism party’s presidential candidate within the last year.

Even the narrative of flawed elections has fallen apart, as the New York Times and others have reported that the there was no election fraud, in the 2019 election that delivered Morales his fourth term as Bolivia’s president.

Just as in the US-backed coup against Evo Morales and the 2004 US-led coup against Haitian President Jean-Bertrand Aristide, Canada is almost certain to play a key role in the destruction of Bolivian democracy, staying true to its imperialist foreign policy.

Aidan Jonah is the Editor-in-Chief of The Canada Files, a socialist, anti-imperialist news site founded in 2019. He has written about Canadian imperialism, federal politics, and left-wing resistance to colonialism across the world. He is a second-year Bachelor of Journalism student at Ryerson University, who was the Head of Communications and Community Engagement for Etobicoke North NDP Candidate Naiima Farah in the 2019 Federal Election.